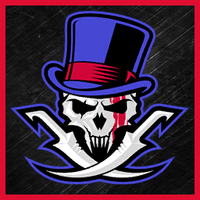 The Brawltimore Razors is one the teams in the Mutant Football League, released on a DLC (for 99 cents) on Halloween (October 31st), 2019. News of this team first emerged from the MFL's twitter page from 2019 in the MFL Draft. They are a parody of the Baltimore Ravens. Their logo is a bloodied skull wearing a top hat with two curved blades crossing underneath. The team plays at B&D Spank Stadium, a parody of M&T Bank Stadium. The stadium is the first to features guarded goalposts; a guillotine moves up and down between the goalposts capable of blocking extra point and field goal attempts.

For the Razors, life after Whacko begins with dynamic QB Lamaul Jackhammer. Like a wife in a failing marriage, Jackhammer is a threat to take off and run at every chance. Howerver, the Razors' WRs could find themselves on the back of milk cartons most games. Mark Instagram could get millions of likes for his play in this run centric offense, but he'll have competition for snaps. The Brawltimore defense is one of the league's best and will be their typical nasty and mean selves. (Mutant Football League, Team Scouting)

This article is a stub. You can help Mutant Football Wiki by expanding it.