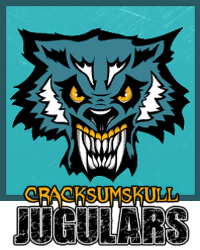 The Cracksumskull Jugulars is one of the teams in Mutant Football League. They are a parody of the Jacksonville Jaguars. Their logo is a snarling wolf in front view. They are obtained by downloading the Demonic Legion Pack DLC along with the Full Metal Mayhem and the Sonic Blast and Time Warp Dirty Tricks. Their stadium is don't Ever Bank Here Field, which is located in Cracksumskull, Florida and is a parody of EverBank Field, which currently named TIAA Bank Field.

Do to global warming & the majority of their city being underwater, the Jugulars play on a floating field in a tropical paradise, but don't let the beauty fool you. The Jugulars are the definition of brutality. Both sides of the ball are all about dishing out punishment & pain to the opposition, but the strength of this team is their ferocious defense, which takes pleasure in destroying QBs & scoring points. (What's in the Demonic Legion DLC Pack)