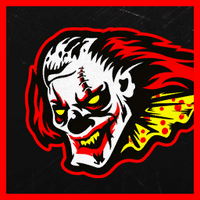 The Karcass City Creeps is one of the teams in Mutant Football League. They are a parody of the Kansas City Chiefs. Their logo is a clown bearing a striking resemblance to the titular character and main antagonist of Stephen King's 1986 novel, It, with a yellow ruffle collar with red spots in a shape of a stone arrowhead. They are obtained by downloading the Werewolf Rampage Pack DLC along with the New Goreleans Zombies and the Murder Ball and Sticky Ball Dirty Tricks. Their stadium is Arrow In Your Head Stadium which located in Karcass City, Misery, and is a parody of Arrowhead Stadium.

The Creeps have all the parts of a winning formula, from a high scoring offense to a hard hitting defense. A few years back, they hired old Blandy Bleed to take over as coach & lead this team to greatness, but it just hasn't worked out yet. With Hattrick MaHomies leading the offense at QB, maybe this is their year? Or maybe they lose in the first round again. You never can tell with this team. (What's in the Werewolf Rampage DLC Pack)