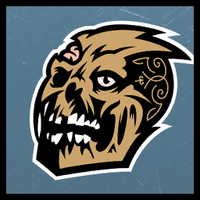 The New Goreleans Zombies is one of the teams in Mutant Football League. They are a parody of the New Orleans Saints and the name was suggested by Christian Howard. Their logo is a zombie head with a bloodshot eye and a piece of it's brain exposed. The team has been revealed on the announcement of Mutant Football League: Dynasty Edition. They are obtained by downloading the Werewolf Rampage Pack DLC along with the Karcass City Creeps and the Murder Ball and Sticky Ball Dirty Tricks. Their stadium is The Terrordome, which is located in New Goreleans, Booziana, and is a parody of the Superdome.

The Zombies are known for their high-powered offense, led by future Hall of Maim QB Drew Sleaze, & the league's best runningback tandem of Mark Instagrim & Valve Killmora. Coach Pawn O. Satan is the brains of the Zombies' operation & has set his sights on winning a Mayhem Bowl trophy this year. The defense could use some work, but the offense could score in a convent. (What's in the Werewolf Rampage DLC Pack)